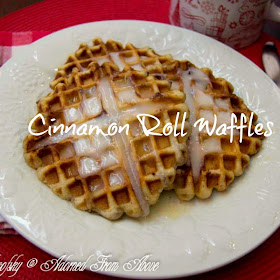 Today we have Cinnamon Roll Waffles for breakfast, and boy are they amazing.  I have been on a kick with my waffle iron lately and I am so excited to share some fun recipes with you.  I am also excited because I have never been a great waffle maker.  I'm not sure why.  Maybe just no interest, and probably because it takes longer then I care to take making waffles.  I think because I have to make the batter, and then I can only make one at a time.  I guess in some ways I'm kind of a lazy cook and love to find shortcuts.  This is definitely a shortcut.  I saw a picture on Pinterest a couple of months ago of Cinnamon Roll Pancakes, they looked delicious, but it looked like too much work.  Then I came up with the idea of using my waffle iron and Pillsbury Cinnamon Rolls.  Now to me that is an easy recipe.  So here it is. 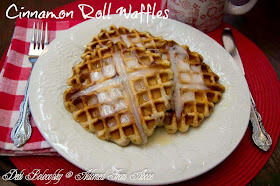 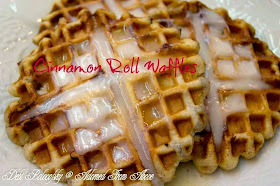 Heat up your waffle iron.

Using a pastry brush, brush some melted butter in the bottom of the waffle iron.

Push the top of the waffle iron down, and you may have to hold it in place for a minute, because the cinnamon roll will want to expand and push the top up.  You want it to be flat.

Remove the waffle from the waffle iron and brush with more melted butter.

Then spread some of the cinnamon roll frosting on top of the waffle.  I did this once I had the next waffle in the waffle iron.

Repeat this process for the rest of the waffles.

This makes 5 Cinnamon Roll Waffles with the Grands.

This is such an easy recipe and I know you are going to love it.  I always love hearing from you.
Have a great week.
Debi
Find us at these great parties
Adorned From Above at 9/18/2014 06:00:00 AM
Share

We love all of your comments and read every one of them. We respond to all comments by email, so it makes us so sad when you are a no-reply comment blogger. Please check you settings, so that we can answer your comments.